LIBERTY CORNER, N.J., April 9, 2018 /PRNewswire/ -- The USGA will bestow its highest honor, the Bob Jones Award, on Dennis Walters of Jupiter, Fla., at a ceremony on June 13, 2018, one of the highlights of U.S. Open Championship week in Southampton, N.Y. 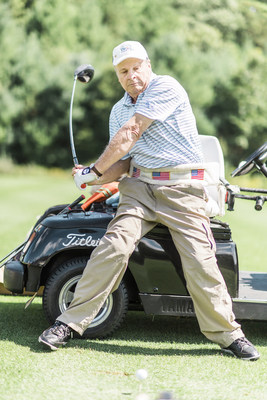 Presented annually since 1955, the Bob Jones Award recognizes an individual who demonstrates the spirit, personal character and respect for the game exhibited by Jones, winner of nine USGA championships.

Known for his never-say-quit attitude, Walters turned the tragedy of being paralyzed from the waist down at age 24 from a golf-cart accident into a personal mission to teach golf and life lessons to a worldwide audience. His story continues to inspire fans of all backgrounds through the countless professional talks and trick-shot shows he has conducted since 1977.

"Dennis Walters exemplifies the values, dedication and passion for golf that all true champions of the game possess," said Mike Davis, executive director/CEO of the USGA. "He inspires all of us with his belief that anyone can play the game, delivering life lessons through golf, and showing that anything is possible in both life and golf if you're willing to work hard enough."

The award ceremony will take place Wednesday evening of U.S. Open week at Sebonack Golf Club, in close proximity to historic Shinnecock Hills Golf Club, site of the 118th U.S. Open Championship. Among the featured speakers for the invitation-only event will be Jack Nicklaus, eight-time USGA champion, 1975 Bob Jones Award winner, and one of Walters' longtime supporters and friends.

In 1967, at the age of 17, Walters won the New Jersey Junior Championship, Caddie Championship and Public Links Junior Championship, an unprecedented triple crown. He attended North Texas State on a golf scholarship and finished 11th in the 1971 U.S. Amateur Championship. He had reached the final stage of the PGA Tour's Qualifying School when the accident changed his life.

Determined to return to the game he loved, Walters started hitting golf shots from his wheelchair. A friend created a mounted swivel seat on the passenger side of a golf cart that allowed him to get back on the course again. In developing this unique way to play, Walters showed that it was possible to play golf even if one has a severe disability.

In the last five decades, Walters has traveled more than 3 million miles and has made more than 3,000 appearances to energize and motivate audiences in all 50 states, Canada, Mexico and the United Kingdom – many of them for enthusiastic junior golfers and those with disabilities. Walters uses his personal experience to challenge each person he encounters to do something in their life that they thought impossible. His message is simple and profound: with hard work, dedication and perseverance, you can achieve almost anything.

"I have been on tour for 41 years, just not the tour I imagined," Walters said. "I started this path for myself as a mechanism to cope with what I considered to be a hopeless situation. I never knew what I could accomplish with my show or how many people it would reach. I made up my mind and was determined to do whatever I could to still make golf my career and a part of my everyday life. What I didn't know was how it would extend past the golf community to show others what is possible under almost impossible odds."

Among his many accolades, Walters received the Ben Hogan Award and The PGA Distinguished Service Award for his remarkable comeback. The International Network of Golf honored Walters by establishing the Dennis Walters Courage Award, which is presented annually.

"When [then-USGA president] Diana Murphy called me, I felt many different emotions but mostly disbelief," said Walters. "I was filled with humility, gratitude and appreciation that the USGA would think that I had done something to earn or deserve an award like this, knowing the ideals and examples that Mr. Jones has set. Having my name added to a list of this magnitude, it's the greatest thing to ever happen to me."

About the USGA
The USGA celebrates, serves and advances the game of golf. Founded in 1894, we conduct many of golf's premier professional and amateur championships, including the U.S. Open and U.S. Women's Open. With The R&A, we govern the sport via a global set of playing, equipment and amateur status rules. Our operating jurisdiction for these governance functions is the United States, its territories and Mexico. The USGA Handicap System is utilized in more than 40 countries and our Course Rating System covers 95 percent of the world's golf courses, enabling all golfers to play on an equitable basis. The USGA campus in Liberty Corner, New Jersey, is home to the Association's Research and Test Center, where science and innovation are fueling a healthy and sustainable game for the future. The campus is also home to the USGA Golf Museum, where we honor the game by curating the world's most comprehensive archive of golf artifacts. To learn more, visit usga.org.