USGA, DEWAR’S® Announce Official Cocktail of the U.S. Open Championship
The summer-inspired “DEWAR’S Lemon Wedge” will be served at The Country Club in Brookline, Mass., this June 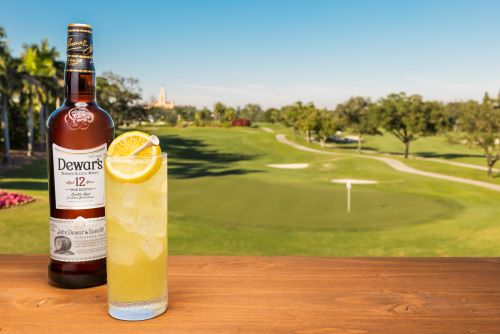 LIBERTY CORNER, N.J. (May 2, 2022) – The United States Golf Association (USGA) and DEWAR’S® have announced the “DEWAR’S Lemon Wedge” as the official cocktail of the U.S. Open Championship.

The cocktail puts an energizing twist on the classic “Highball,” refreshing both the game of golf and Scotch whisky by showcasing a new spin on a classic. The recipe features DEWAR'S 12-year-old whisky, club soda and fresh lemonade, topped with a golf tee pick and lemon wedge for garnish. The DEWAR’S Lemon Wedge will be available to patrons on-site at the 2022 U.S. Open Championship, scheduled for June 13-19 at The Country Club in Brookline, Mass., and will be served in a special-edition U.S. Open memorabilia cup in hospitality venues and ticketed facilities across the grounds.

"When it comes to warm-weather drinks out on the golf course, it’s hard to beat a highball, especially when you add in some truly refreshing ingredients that allows the complex and flavorful taste of DEWAR’s 12-year-old whisky to shine through," noted Alex Farrer, DEWAR’S brand manager. "With the cocktail name’s play on the golf wedge and the lemon garnish, the DEWAR’s Lemon Wedge is designed to uphold the Scotch whisky brand’s sporting legacy, linking the worlds of golf and cocktails.”

Enjoyed by Scotch whisky drinkers around the globe, DEWAR’S has won more than 1,000 international awards for quality and taste, making it the world’s most-awarded blended Scotch whisky. DEWAR’S became the official Scotch whisky of the U.S. Open in 2021.

As part of the multi-year agreement, DEWAR’S will produce a special limited-edition commemorative bottle for each year’s U.S. Open, to be sold online and in select markets. The 2022 edition, crafted by Master Blender Stephanie Macleod, is a 19-year-old Scotch whisky double-aged and with an extra-matured finish exclusively in new American Oak casks and ex-Rye Whiskey casks. Part of the proceeds from the sale of this limited annual edition will benefit the USGA Foundation. The bottle celebrating the 122nd U.S. Open Championship at The Country Club will be released this May and be available for purchase from all fine wine and spirit merchants and online during the lead-up to the championship through the final round on Father’s Day.

Established in 2017, the USGA Foundation secures resources to fulfill the USGA’s commitment to invest in programs and solutions that best serve golf for all who love and play it. The foundation is focused on four impact areas that are essential to the health and future of the game: enhancing the on-course experience for all players, creating a healthier relationship between courses and the environment, celebrating traditions, and preparing future leaders.

The USGA is a nonprofit organization that celebrates, serves and advances the game of golf. Founded in 1894, we conduct many of golf’s premier professional and amateur championships, including the U.S. Open and U.S. Women’s Open Presented by ProMedica. With The R&A, we govern the sport via a global set of playing, equipment, handicapping and amateur status rules. The USGA campus in Liberty Corner, New Jersey, is home to the Association’s Research and Test Center, where science and innovation are fueling a healthy and sustainable game for the future. The campus is also home to the USGA Golf Museum, where we honor the game by curating the world’s most comprehensive archive of golf artifacts. To learn more, visit usga.org.

Founded in 1846 by John Dewar, DEWAR'S® has grown from a small wine and spirits merchant shop in Scotland, to one of the largest Scotch whisky brands in the world. Best known for its iconic DEWAR'S WHITE LABEL, it has expanded its family to create a portfolio of premium and super premium whiskies including DEWAR'S 12-Year-Old, DEWAR'S 15-Year-Old, DEWAR'S 18-Year-Old, DEWAR’S Double Double Series, DEWAR’S Caribbean Smooth and the exclusive DEWAR'S 25.  These whiskies are crafted using the DEWAR'S oak marrying ageing process, which involves returning the hand-crafted blend to vintage oak casks for further maturation. The result is a smoother taste with a long, lingering finish; a taste that wins medals and applause, making DEWAR'S the world's most awarded blended Scotch. The DEWAR'S brand is part of the portfolio of Bacardi Limited, headquartered in Hamilton, Bermuda. Bacardi Limited refers to the Bacardi group of companies, including Bacardi International Limited.

Founded 160 years ago in Santiago de Cuba, family-owned Bacardi Limited currently employs more than 8,000, operates production facilities in 10 countries, and sells its brands in more than 170 countries. Bacardi Limited refers to the Bacardi group of companies, including Bacardi International Limited. Visit http://www.bacardilimited.com or follow us on Twitter, LinkedIn or Instagram.