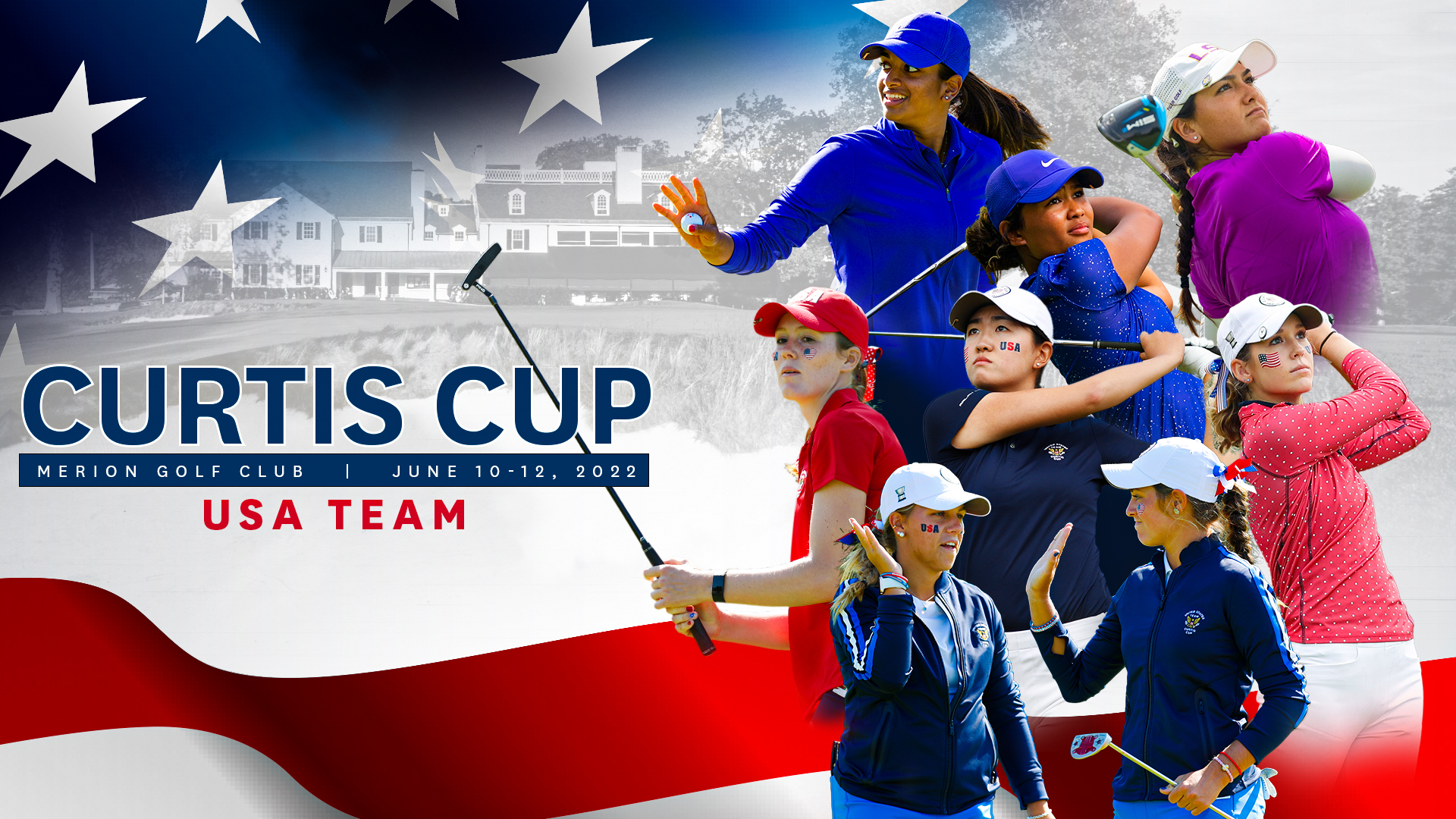 LIBERTY CORNER, N.J. (April 15, 2022) – The USGA has finalized the eight-player roster for the 2022 USA Curtis Cup Team, as four women were selected on Friday to join the four previously named players. The 42nd Curtis Cup Match will be held June 10-12 at Merion Golf Club in Ardmore, Pa.

They join Jensen Castle, 21, of West Columbia, S.C.; Rachel Heck, 20, of Memphis Tenn.; Rachel Kuehn, 20, of Asheville, N.C.; and Rose Zhang, 18, of Irvine, Calif., who were named to the team as automatic selections. Seven of the eight players are currently inside the top 30 in the Women’s World Amateur Golf Ranking®.

"I’m so excited to represent the red, white, and blue at the Curtis Cup for the second time,” said Migliaccio. “Ever since I was a freshman in college, it has been my dream to make the Curtis Cup Team. My first experience in Wales was one of the best weeks of my life. Getting the opportunity to play in front of thousands of fans is something I will always remember, and I’m counting down the days until I get to hear those roaring cheers on home soil.”

Due to the impact of the COVID-19 pandemic, the 42nd Curtis Cup Match will take place just nine months after the USA Team earned victory at Conwy Golf Club in Wales in the 41st Curtis Cup Match. The USA Team will return five players from that winning effort, with Avery, Ganne and Stone as new additions. Ganne did travel to Wales as the team’s second alternate last August.

"Especially after being there last year, experiencing the excitement firsthand and cheering on the team, it was one of my top goals this year,” said Ganne. “I couldn’t be more proud or excited to compete in a Curtis Cup at a venue as special as Merion. I know it’s going to be a week I remember for the rest of my life.”

The alternates for the USA Team are, in order of ranking: Brooke Seay, 21, of San Diego, Calif., and Anna Davis, 16, of Spring Valley, Calif.

The Curtis Cup Match is contested by two teams of eight female amateur players, one from the United States of America and one from Great Britain and Ireland, which is composed of England, the Republic of Ireland, Northern Ireland, Scotland and Wales. The USGA’s International Team Selection working group selects the USA Team, while The R&A selects the GB&I Team.

Amari Avery, 18, of Riverside, Calif., is a freshman at the University of Southern California who just enrolled for the spring semester. She recently earned a T4 finish at the Augusta National Women’s Amateur after an impressive junior career that included an appearance on the 2021 U.S. Junior Solheim Cup team, as well appearances in several professional tournaments, including the 2021 U.S. Women’s Open and 2021 LPGA Founders Cup. She won the 2019 California Women’s Amateur and is currently No. 24 in the Women’s World Amateur Golf Ranking.

Jensen Castle, 21, of West Columbia, S.C., defeated Yu-Chiang (Vivian) Hou, 2 and 1, to win the 121st U.S. Women’s Amateur Championship at Westchester Country Club in Rye, N.Y., last August. Three weeks later, she earned 2 points for the victorious USA Curtis Cup Team, finishing with a 1-1-2 record in Wales. Castle, who set Kentucky’s single-season stroke average record as a freshman, notched two top-20 finishes in the fall and led the team with a 71.75 stroke average. She recently earned a T12 finish at the 2022 Augusta National Women’s Amateur. She is currently No. 67 in the WAGR.

Megha Ganne, 18, of Holmdel, N.J., shared the first-round lead in the 2021 U.S. Women’s Open at The Olympic Club before earning low-amateur honors with a T14 finish. In the past year, she won the Scott Robertson Memorial, recorded top-five finishes in the Annika Invitational, Girls Junior PGA Championship and the AJGA Tournament of Champions, in addition to representing the United States in both the Junior Solheim Cup and Junior Ryder Cup. In November, she officially committed to playing college golf at Stanford University. Ganne is a four-time Drive, Chip and Putt National Finalist and is an active participant in The First Tee of Metropolitan New York. She is currently No. 20 in WAGR.

Rachel Heck, 20, of Memphis, Tenn., is a sophomore at Stanford University who won the 2021 Annika Award as the top collegiate golfer. She became the third player in women’s college history to sweep conference (Pacific 12), regional (Stanford Regional) and national titles (NCAAs), joining USC’s Annie Park and Arizona’s Marisa Baena. Last year, Heck became the first Stanford woman to win an NCAA title, and the ninth freshman to achieve the feat. Heck’s 69.72 scoring average over 25 rounds is the lowest in NCAA women’s golf history. She was a semifinalist in the 2021 U.S. Women’s Amateur, and a member of the victorious USA Curtis Cup Team last summer, compiling a 2-2-1 record. She is currently No. 3 in the WAGR.

Rachel Kuehn, 20, of Asheville, N.C., a junior at Wake Forest University, earned medalist honors in the 2021 U.S. Women’s Amateur Championship at Westchester Country Club, posting 6-under-par 138 on the famed West Course. She had a strong start to her collegiate season, finishing runner-up at the Bryan National Collegiate before winning the Tar Heel Invitational by a stroke after a second-round 63, the lowest 18-hole score in Wake Forest women's golf history. She won the 2020 North & South Women’s Amateur and the 2020 Ladies National Golf Association Amateur. Kuehn’s mother, Brenda Corrie Kuehn, was a member of the USA Curtis Cup Team in 1996 alongside Sarah Ingram, as well as in 1998, when she went 4-0 and scored the clinching point in the USA’s victory. The Kuehns became the second mother/daughter tandem to have played in a Curtis Cup when Kuehn played in 2021 at Conwy Golf Club in Wales, where she scored the clinching point for her team on the way to a 3-1-0 record. She is currently No. 8 in the WAGR.

Emilia Migliaccio, 22, of Cary, N.C., will make her second Curtis Cup Team appearance, going 2-2 in her Match debut last August. She was a quarterfinalist in the 2020 U.S. Women’s Amateur and finished runner-up to Tsubasa Kajitani in the 2021 Augusta National Women’s Amateur. Migliaccio, who last spring graduated from Wake Forest University, was a two-time first-team All-American and helped lead the Demon Deacons to the 2019 ACC title while capturing the ACC individual title. Migliaccio decided against turning professional and returned to Wake Forest in the fall for a two-year master’s program in communication. She will rejoin the school’s women’s golf team next year. She currently works part-time as a writer and on-air broadcaster for Golf Channel during which she has covered LPGA, NCAA and USGA events. She is currently No. 17 in WAGR.

Rose Zhang, 18, of Irvine, Calif., is a two-time USGA champion and currently No. 1 in the Women’s WAGR, having won the McCormack Medal as the world’s leading amateur in August for the second consecutive year. After winning the 2020 U.S. Women’s Amateur in Maryland, Zhang earned her second USGA title last July, defeating Bailey Davis, 6 and 4, in the final match of the 2021 U.S. Girls’ Junior, becoming just the eighth player to win both the U.S. Girls’ Junior and U.S. Women’s Amateur. A freshman at Stanford University, Zhang began her collegiate career earning individual victories in her first three starts. It was the first time in Cardinal history that a freshman – male or female – won their first three events. Prior to arriving at Stanford, Zhang went 4-0-1 to lead the United States over GB&I in the 2021 Curtis Cup. She has competed in six women’s major championships, making the cut in three, including a T11 finish in the 2020 ANA Inspiration. Zhang recently finished T12 at this year’s Augusta National Women’s Amateur.