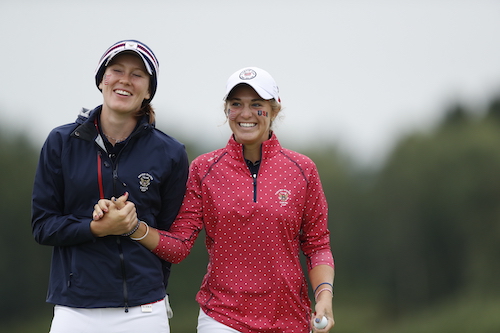 The following 12 players have accepted invitations to the practice session (with current and future college affiliation):

Jensen Castle and Rose Zhang were previously named to the 2022 USA Curtis Cup Team as automatic selections due to winning the 2021 U.S. Women’s Amateur Championship and 2021 Mark H. McCormack Medal, respectively. For the others, an invitation to the Curtis Cup practice session does not guarantee selection to the eight-player USA Team. Players not invited will also be considered for inclusion on the team. The 42nd Curtis Cup Match will take place June 10-12, at Merion Golf Club in Ardmore, Pa.

Five players competed in the 2021 Curtis Cup Match, which was postponed from 2020 due to the impact of the COVID-19 pandemic: Castle, Rachel Heck, Rachel Kuehn, Emilia Migliaccio and Zhang. Megha Ganne, who captured low-amateur honors at the 2021 U.S. Women’s Open, traveled to Wales as the team’s second alternate.

Sarah LeBrun Ingram, of Nashville, Tenn., will return as captain of the USA Team for the 2022 Curtis Cup Match. A three-time champion of the U.S. Women’s Mid-Amateur, Ingram was a member of the 1992, 1994 and 1996 USA Curtis Cup Teams, where she held a 2-1 record in singles matches.

"The amateur talent in the United States is so incredibly strong right now, and it’s an honor to gather with this group for a practice session next month,” said Ingram. “We have a great mix of young women, including many players who helped lead us to victory in Wales just a few months ago and some players who have played fantastic golf this fall on the collegiate level who I am excited to get to know. I'm very much looking forward to our time together and I know the players are as well."

The Curtis Cup Match is contested by two teams of eight female amateur players, one from the United States of America and one from Great Britain and Ireland, which is composed of England, the Republic of Ireland, Northern Ireland, Scotland and Wales. The USGA’s International Team Selection Working Group selects the USA Team, while The R&A selects the GB&I Team.

Elaine Ratcliffe will again serve as GB&I captain. Ratcliffe, a native of Cheshire, England, was a member of the victorious GB&I Team in the 1996 Curtis Cup Match.

The 42nd Curtis Cup Match is free and open to the public, and spectators are encouraged to attend. Those interested in receiving up-to-date information should register here.