“I’m excited to work with Stu, Fred, and all the members of the USGA Executive Committee,” said Mike Whan, CEO of the USGA. “I’m grateful for their support of the organization and our mission and their commitment to and passion for the future of the game.”

LIBERTY CORNER, N.J. (Dec. 7, 2021) – The USGA Nominating Committee has released its proposed slate of 2022 Executive Committee members and officers. The Executive Committee will again be led by Stu Francis of Hillsborough, Calif., who will be serving the final year of his three-year term as USGA president, and by Fred Perpall of Dallas, Texas, who has been nominated to serve as president-elect.

In addition, Sinclair Eaddy Jr., of Baltimore, Md., and Kevin Hammer of Boynton Beach, Fla., have each been nominated to serve a three-year term on the USGA Executive Committee, a volunteer group of 15 people that provides strategic and financial oversight as the Association’s policy-making and governance board. 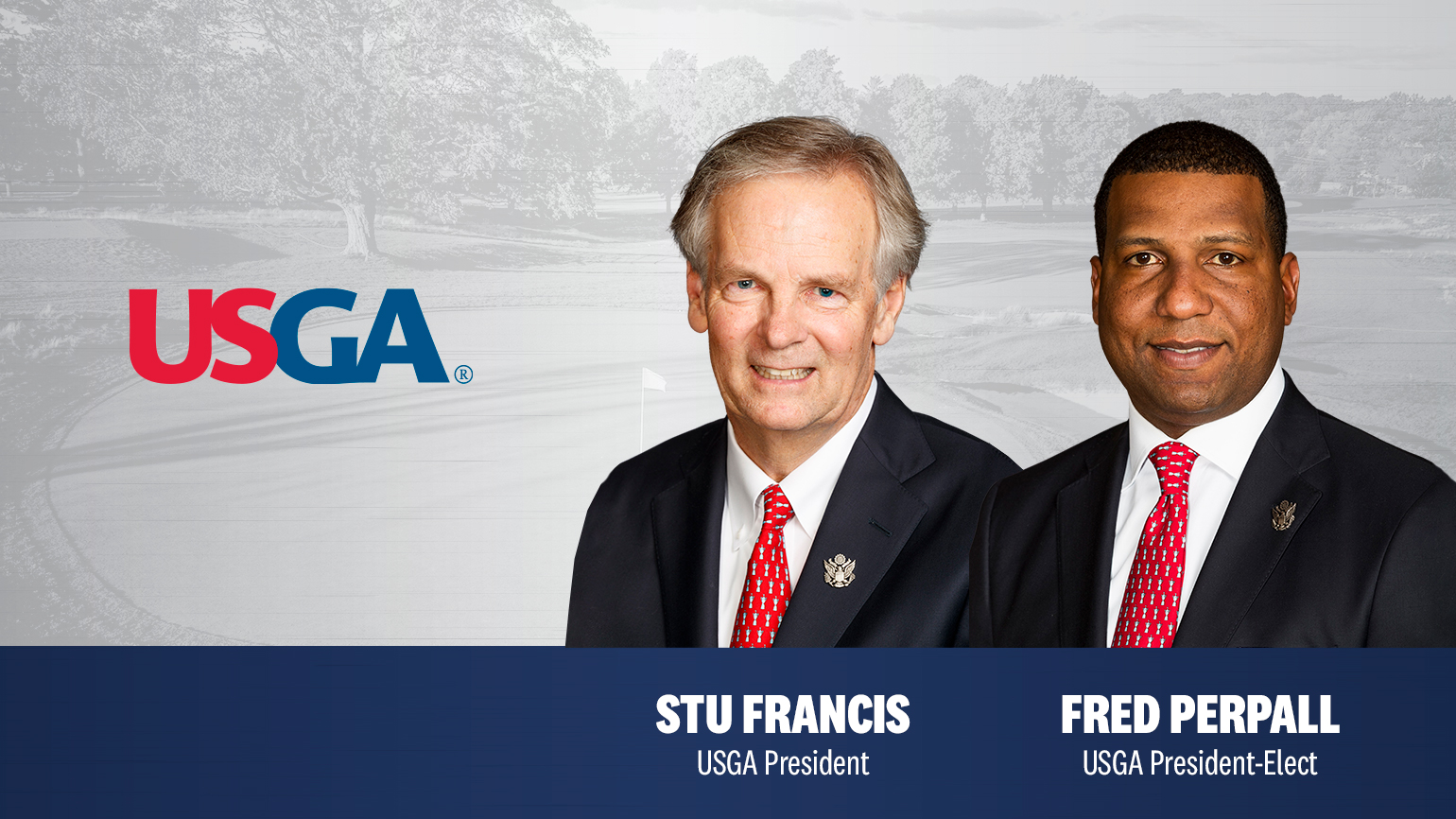 In addition, Perpall, Tony Anderson of Chicago, Ill., and Deborah Platt Majoras of Cincinnati, Ohio, have all been nominated to serve a second three-year term on the USGA Executive Committee.

The election of Executive Committee members will take place at the USGA Annual Meeting on Saturday, Feb. 19, 2022 in Carlsbad, Calif.

Francis is currently in his seventh year as a member of the USGA Executive Committee. He is an accomplished amateur golfer who has played in three U.S. Amateur Championships and two NCAA Championships and in 2021 was elected to the Ohio Golf Association Hall of Fame. Francis earned a B.A. from Princeton University, where he was co-captain of the varsity golf team and selected to the first team All-Ivy and honorable mention All American teams. He also earned an MBA from Stanford University’s Graduate School of Business.

He is a senior managing director for Evercore, where he leads the firm’s Silicon Valley technology practice. During his business career, he has been an advisor to many leading technology companies, including Dell, Facebook, Google, Qualcomm and Tesla.

Perpall, a native of the Bahamas who now calls Dallas home, has been nominated as president-elect, a position created in 2019 to provide committee leadership succession and continuity. Perpall, currently completing his third year on the Executive Committee, chairs the Championship Committee and serves on the Amateur Status Committee.

Professionally, Perpall is the CEO of The Beck Group, where he leads the firm’s domestic and international architectural design, planning, real estate consultancy and construction businesses. A registered architect, Perpall was elected to the prestigious American Institute of Architects College of Fellows in 2016. He earned his bachelor’s and master’s degrees from the University of Texas at Arlington and is a graduate of the Harvard Business School’s Advanced Management Program. He played basketball and ran track in college and was a member of the 1994 Bahamian National Basketball Team.

Perpall was a member of the Board of Trustees who helped build Trinity Forest Golf Club in Dallas. The public/private partnership that led to the club’s creation has served as an inspiration within its underserved community, serving as host to Southern Methodist University’s golf program, numerous charitable tournaments and events for the Dallas chapter of The First Tee.

“I’m excited to work with Stu, Fred, and all the members of the USGA Executive Committee,” said Mike Whan, CEO of the USGA. “I’m grateful for their support of the organization and our mission and their commitment to and passion for the future of the game.”

Per the bylaws of the association, Eaddy and Hammer will each serve a three-year term beginning in 2022, with the potential to be elected for a second and final three-year term in 2025. The USGA made the strategic decision to increase Executive Committee member term lengths from one year to three in 2020 as part of a regular review to enhance the effectiveness of its governance structure.

If elected, Eaddy and Hammer will assume seats vacated by retiring members Mike Bailey of Salt Lake City, Utah, and Stephen Beebe of La Quinta, Calif. Bailey has served on the Executive Committee since 2016 and Beebe joined a year later.

Eaddy serves as the president and CEO of the National Links Trust, a nonprofit organization focused on promoting and protecting affordability, accessibility, and engaging golf course architecture at municipal golf courses across the U.S. Eaddy previously served as president and executive director of The First Tee of Greater Baltimore. He currently serves on the boards of the Maryland State Golf Association and the Middle Atlantic Golf Association and is a director of the Western Golf Association. He has served as a USGA committee member since 2018 and is a volunteer Rules official at the regional and national levels.

Prior to joining the golf industry, Eaddy, who earned a bachelor’s degree in business and economics at Franklin & Marshall College, had a successful career in the private sector at Legg Mason Global Asset Management and Merrill Lynch Wealth Management.

Hammer is currently in his 10th year as a member of the Florida State Golf Association Executive Committee and his second and final year as FSGA president. He was introduced to the game at a young age by his parents, both of whom enjoyed long careers in the golf industry. Hammer spent his early years working at multiple golf facilities and quickly developed a lifelong love, passion and respect for the game. A former first-team American Junior Golf Association All-American, Hammer played collegiately at the University of Florida and has qualified for multiple USGA championships. Driven by his desire to give back to the game, Hammer began volunteering with the Florida State Golf Association.

Professionally, Hammer is a senior vice president, wealth management advisor, and portfolio manager at Bank of America / Merrill Lynch. For more than 23 years, Hammer and his team have managed investments for individuals, families, foundations and professional athletes.