LIBERTY CORNER, N.J. (March 17, 2021) – The United States Golf Association (USGA), at the invitation of Crooked Stick Golf Club members Joe and Marcia Luigs, along with Tony Pancake, the club’s director of golf, has acquired a selection of artifacts and ephemera from the estate of Pete and Alice Dye.

The collection, which is to be preserved at the USGA Golf Museum and Library, includes more than 50 items from the Dyes’ life and career together and was obtained from their home on the grounds of Crooked Stick in Carmel, Ind., which served as their summer residence for many years. Pete and Alice Dye designed Crooked Stick, which was founded in 1964 and has gone on to host six USGA championships, most recently the 2009 U.S. Senior Open.

Highlights of the collection include:

To view photos of the collection, visit usga.org.

“Pete and Alice Dye were longstanding pillars of the golf community, contributing to the game through their inventive golf course designs and mentoring those who followed in their footsteps,” said Hilary Cronheim, director of the USGA Golf Museum and Library. “This donation will allow us to more fully share their story with future generations. We are very fortunate to be continually entrusted with legacies such as the Dyes’.”

At the invitation of Crooked Stick, the USGA will share the important responsibility of preserving the legacy of Alice and Pete Dye, who passed away in 2019 and 2020, respectively. This donation ensures their storied partnership will be celebrated alongside 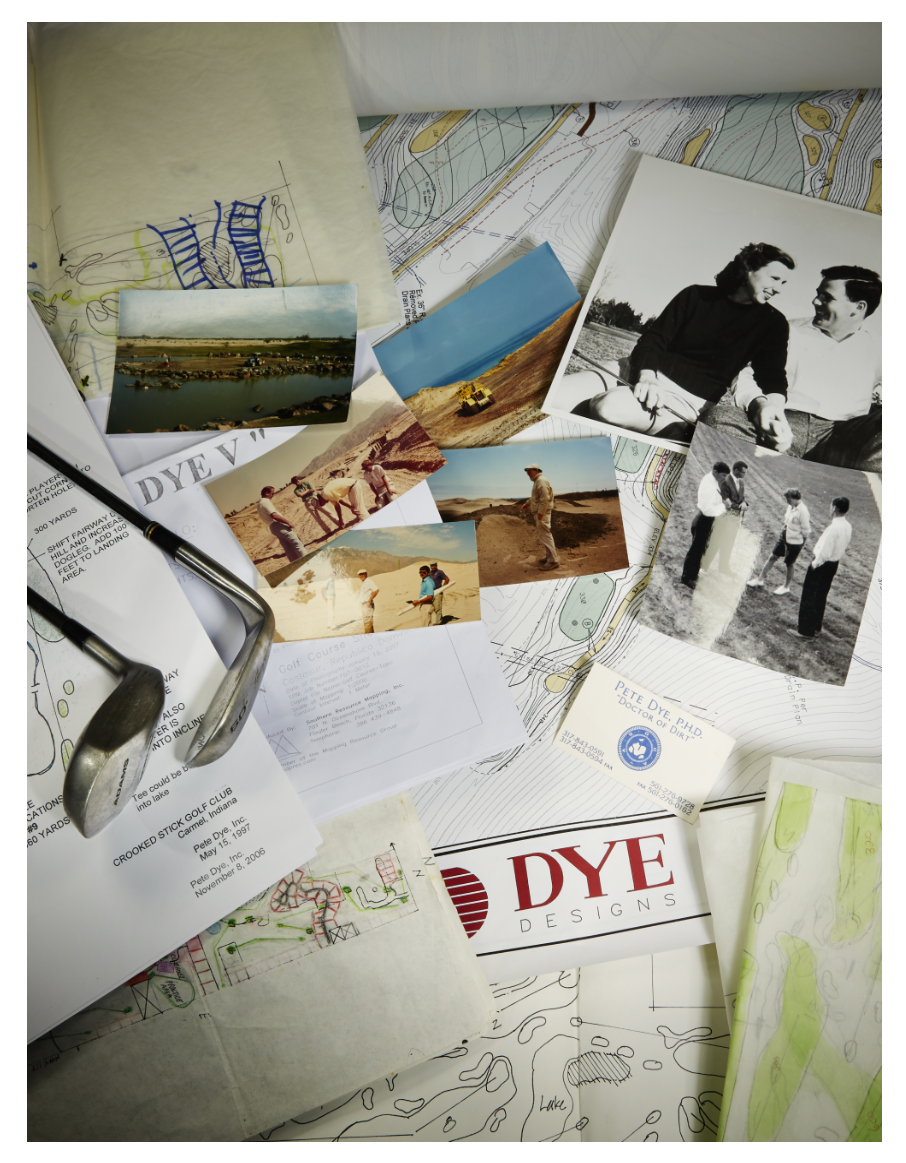 golf’s most impactful contributors at the USGA Golf Museum. The Dyes enjoyed a longstanding relationship with the club that will continue through its commitment to commemorating the couple’s legacy. In addition, Dye courses have hosted dozens of USGA championships, and Alice Dye had a long association with the USGA through her competitive and volunteer career, including two U.S. Senior Women's Amateur titles.

The Dyes’ approach to golf course design balanced innovation, challenge and accessibility. After marrying in 1950, the two became a dynamic duo in golf course architecture, amassing an impressive repertoire of championship courses, including Crooked Stick and The Honors Course in Ooltewah, Tenn., which will host its sixth USGA championship in 2024, with two additional championships on the docket. Among the noteworthy Dye design collaborations are TPC Sawgrass (Ponte Vedra Beach, Fla.), The Ocean Course at Kiawah Island (S.C.) Resort, the Teeth of the Dog Course at Casa de Campo (Dominican Republic), and Whistling Straits (Kohler, Wis.). In addition, several notable course designers, including Jack Nicklaus, Tom Doak, Bill Coore, the Dyes’ two sons, Perry and P.B., and their niece, Cynthia Dye McGarey, collaborated with or were mentored by the couple.

Throughout their partnership, Pete produced the initial designs, paying close attention to agronomy and layout, while Alice edited and amended Pete’s ideas. She is credited with suggesting some of the most innovative aspects of Dye designs, such as the island-green 17th hole at TPC Sawgrass.

In the 1980s, Alice presented her “Two-Tee System” as a solution for female golfers of varying skill levels who typically were afforded only one teeing ground option. Alice was voted president of the American Society of Golf Course Architects in 1997. As the first female to serve in that role, she strongly advocated for more women to be accepted as ASGCA members. Alice was most recently featured in the USGA Museum’s 2017-19 exhibit, “Breaking New Ground: Women and Golf Course Architecture.”

The USGA Golf Museum and Library is the nation’s oldest sports museum and the world’s leading institution for the collection, preservation, interpretation and dissemination of golf history. It is the most trusted repository for preserving the legacies of the game’s greatest figures.

About the USGA
The USGA is a nonprofit organization that celebrates, serves and advances the game of golf. Founded in 1894, we conduct many of golf’s premier professional and amateur championships, including the U.S. Open and U.S. Women’s Open. With The R&A, we govern the sport via a global set of playing, equipment, handicapping and amateur status rules. The USGA campus in Liberty Corner, New Jersey, is home to the Association’s Research and Test Center, where science and innovation are fueling a healthy and sustainable game for the future. The campus is also home to the USGA Golf Museum & Library, where we honor the game by curating the world’s most comprehensive archive of golf artifacts. To learn more, visit usga.org.